How did you celebrate this epic week? 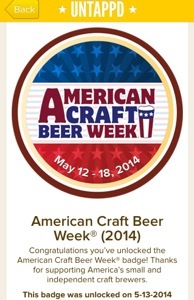 I chose Quest for my first event, where I put in my vote for the Brewers vs Bartenders competition. The respective groups brewed their own beers—an oak-aged Scotch Ale and a Black IPA. Did you try them? Which one did you prefer?

I also stuck around for the latest cask: an Imperial Stout with Granny Smith apples and bacon.

This was a big week for Quest, which launched a new app on Google Play to help you keep up with the brewery and also released the Ponce cucumber-jalapeno session ale. I wrapped up my ACBW with another visit to Quest, where I chose an Ellida hop-experiment rather than the new Ponce. I’ll be sure to post about it when I finally get to try it.

With a mid-week Fitz and the Tantrums concert down in Charleston, my local adventures were limited. I returned on Saturday to attend Brewery 85’s Wheatfest, the official release of the 864 Weizen. There is not question that Will McCameron and the Brewery 85 staff knows how to party. The lovely Darby Wilcox lilted for drinkers, while Bavarian Pretzel Factory kept everyone fueled for another round. This classic hefeweizen offers a gorgeous golden color and a nice effervescence, something drinkers will be craving on the brewery’s expansive patio this summer. 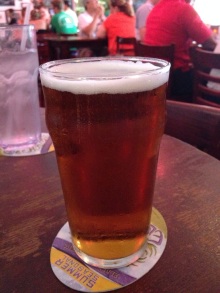 Speaking of great beer and summer, I’m planning to visit in the coming weeks since Westbrook should be releasing Mexican Cake! If anyone hears an exact date, do share. Though my trip this week was brewery-free, I did at least get to sip something new: Freehouse Brewery‘s London 2014 India Porter, which paired well with my Tattooed Moose dinner, and Natty Greene‘s Southern Pale Ale. What a tasty showcase of Cascade hops! This Greensboro, NC-based brewer just began releasing in South Carolina earlier this year, so I’ll be looking for more in the Greenville area.