Meet the River Rats in their natural habitat: 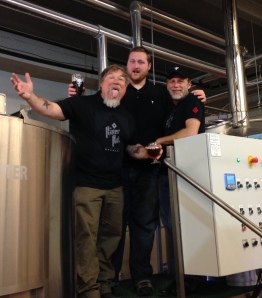 After getting lost in the wilds of North Carolina post-moving party for a friend, I arrived an hour late in Columbia to the River Rat Brewery shindig that I won tickets to at World Beer Fest. I stepped into a naturally lit taproom and was greeted by the aroma of barbecue and only a handful of people. The chatter of a crowd hummed somewhere nearby, but I couldn’t figure out where to head next. I soon met Claire, who works as some of the business brains behind the operations and immediately introduced me to Mark as a VIP. Fancy shmancy.

Mark gave me a hard time for arriving late and then quickly sated my guilt with my first beer of the night: The Hazelnut Brown Ale. Rich in color and nutty flavor, this brew accompanied me through Drew’s extensive tour of the facility. Some fun facts about River Rat:

I spent much of my visit talking about favorite beers with my fellow VIPs, a couple who won tickets during the first session of World Beer Festival. We were treated to a taste of the Monck’s Corner Abbey Ale straight out of tanks, which will be ready for regular consumption later this month. This Belgian brew with noble hops and the familiar flavors of dates and cloves seemed to change flavor as soon as Drew mentioned “bubblegum.” It’s sounds strange to see I tasted that in a beer, but it’s a mouth experience I’ve had before and couldn’t quite nail.

Claire and I left the din of restaurant and store owners sipping beer—the real guests of honor at this party—for the quiet and good food of the taproom. I had a glass of the Broad River Red Ale, my personal favorite of the evening, and also tried the Double IPA, a favorite of Claire and Mike. A reasonably hoppy beer, this English-style brew began as one of Mike’s homebrewing recipes. Mark then took those details and worked out a recipe for large-scale production.

And speaking of increasing size, River Rats is already expanding! The demand for the beer is so great pre-opening that the brewery has already ordered additional tanks. Claire showed me the gigantic cooler, which is home to small stack of filled kegs, but there is no doubt it will be bursting with beer in a few months. I can only begin to imagine how popular their beers and how busy their taproom will be when USC’s football season begins (the brewery is located by Williams-Brice Stadium).

At the official opening on March 10th, visitors can expect to see a live music on the gigantic, outdoor deck, where smoking and dogs are also welcome. All five brews should be available for pints and growlers. In the near future, the deck will be accompanied by a beer garden and even a “drive-thru” window, where one can easily pop by for a growler. How cool is that?

Between the lively chat with Claire and the entertainment of the brewers, I was shocked when 5 p.m. rolled around the event came to a close. This was the first experience I’ve had in an exceedingly long time that has left my nostalgic for my home town and wishing I lived closer (it’s only a tiny tug, though–there’s no way I’m really moving back to the Famously Hot armpit of SC).

For the time being, I will patiently await their beers at Community Tap’s festival on April 5th!

A huge, huge thanks goes to everyone at River Rat Brewery for the raffle tickets, the free shirt and glass and sticker, and the patience to let me trail their every move and ask too many questions.

You can learn more about the brewery, the beers and where they’re available in Columbia in this great Free Times article. Be sure to follow River Rat Brewery on Facebook, Twitter and Instagram for the latest news.