The six-member committee meets today to discuss the bill, and scbeerjobs.com is set up to send them all an email and let them know how much we support this bill. Head to the site for another quick sign-up to shoot this new group a message about how you want to see more jobs in South Carolina. 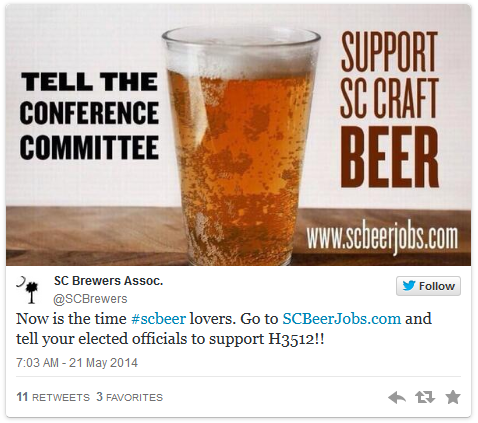 As would be expected, Anheuser-Busch has finally reared it’s gigantic head at this well-meaning bill, claiming that new laws allowing our state’s few, small brewpubs to produce more beer and distribute on their own threatens the three-tier system that overwhelmingly works in their favor. Let these representatives know that the locally minded, community-invested, creative brewers behind our craft beer industry deserve to have some of the current distribution, production and sales limits relieved from them so they have more of a chance to compete with the monopolizing AB InBev.

If you haven’t seen the letter AB InBev sent out a few days ago, head here: http://beerstreetjournal.com/read-anheuser-buschs-lawyers-fight-stone-bill/

A huge thanks goes out once again to the SC Brewer’s Association, Brook Bristow, and Wesley Donehue for keeping everyone educated about the Stone Bill’s progress.